In 1995, Toby & Sylvia Shine had a vision. The vision involved turning 100 acres of farm land into a small community on the northeast shore of Lower Gar Lake. Toby & Sylvia were two determined individuals who went to work to make their vision a reality.

One of the challenges occurred in the spring of 1995. What we now know as the preserve was a spawning area for Carp. There was a drought that year and consequently the Carp couldn’t get out and they died. Obviously, the smell was less than desirable.

The Carp had to be removed, thus, Sylvia dubbed it “the living hell summer”. Grant Clark, Sylvia, Toby and Ray Trankle pitched in. They trucked the dead Carp to the northeast part of Pelican Ridge and buried them. This spot was, for a period of time, “Community Gardens”.

During 1995 and 1996, Pelican Ridge was plotted and developed. The pond, clubhouse, pool and about 16 homes were constructed for the Grand Opening in 1996 with then Iowa Governor Terry Branstad present.

To begin with it felt that the majority of homes would be manufactured single-wide mobile homes without a garage. Quickly, this changed to predominately double-wide and many having two-car garages. Now, there are 150 plus homes in the Pelican Ridge Mobile Home Community.

In the beginning, residents purchased a home and rented a lot. The beginning monthly maintenance fee was $87 which has risen to $160/month over 15 years.

On January 23, 2003, the Pelican Ridge Lot Owners Association was formed. All residents were given the opportunity to purchase their lots and as a result, the last rented lot was purchased in 2009.

Pelican Ridge MHC, Inc., the developer, has certain rights and owns the remaining lots to be sold for new homes, which will also add new association members.

In August of 2015, IGL Construction purchased the remaining shares of Pelican Ridge Mobile Home Community from Toby and Sylvia Shine. Construction of 13 slab on grade homes commenced shortly thereafter. Owners Josh and Melissa Nelson, Jerry and Candie Nelson, Kellie Beneke and Todd Krukow are excited to continue to develop and enhance the community.

Provide affordable living for our residents and support amenities that make Pelican Ridge an enjoyable Okoboji quality of life experience. 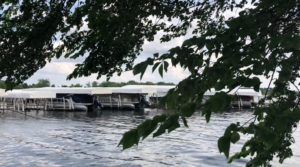 Residents can schedule its use for Private Parties/Family Gatherings. Each resident may get a special key that opens both the clubhouse and pool, provided that they pay a $10.00 deposit.

Storm Shelter is in the lower level in case of emergency. The storm shelter is located adjacent to the pool. The shelter contains restroom and shower areas.

The swimming pool located adjacent to the clubhouse. It is open Memorial Day through Labor Day, so long as weather cooperates.

A license free fishing spot has three docks, (one is handicap accessible) and is stocked with fish such as Bass, Bull-heads, Perch, Pan Fish and Crappies. It’s a great place to fish with your children or grandchildren!

The playground area is adjacent to the clubhouse. It has a combination slide and swing set for children to play on. There is a bench provided.

The tennis court area is also a full size regulation basketball court. Located in front of the clubhouse area it serves as a shuffleboard court as well.

Hoists are available for seasonal rent. Sand beach and sand volleyball court are located adjacent to the marina.

Shop and storage area for equipment to maintain the grounds and facilities.

What Lot Owner services include:

The LOA owns a mini storage building. Spaces are for rent. This facility is a self-supporting part of the association.